It was with great disgust that I read the story of Mohammed Bello Masaba. Don't get me wrong, I don't despise his actions, rather those of the Nigerian government. Nigerian police have arrested Masaba, a Muslim preacher, for having too many wives! He is charged with violating Islamic law which forbids men from having more than 4 wives. At 84 years old, with 86 wives and 107 children, Masaba says that he gets his power from Allah and is therefore able to have such a large family. For those of you who can't count to 86, and therefore don't know how much it is, look at the picture which shows some of his wives.

Even though Masaba has violated Islamic law, I still think Nigerian authorities acted inappropriately because they haven't properly assessed the situation. Masaba, like nearly 10% of Western infidels, has Multiple Personality. He actually has 23 known different personalities so he can technically still marry another 6 women. It doesn't matter that 5 of his personalities are under the age of 10 and 3 personalities are women. Where is the Islamic Association for Multiple Personality to defend him? Perhaps he will meet another 6 loves of his life in prison...?
Posted by Shahid72 at 4:22 PM 1 comment: 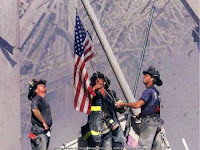 Today is a special day in our part of the world, as well as in the West. The reason why today is special is the same, but the way we commemorate the day is quite different. I think that this will be a great opportunity for me to explain the differences between us. I have been asked many times how we differ from the West. Rather than get into a lengthy discussion, I will let you watch the video and you will understand the great differences between us.

A Muslim At Heart

There has been much speculation here in the Arab world about Barack Obama's religion. There have been some radicals who have suggested that Obama is actually a Christian and not a Muslim. Yet others have accused him of hiding his Islam and claiming to be Christian. But now we all know the truth. Obama is a true Muslim and he's not embarrassed to tell it to the world. 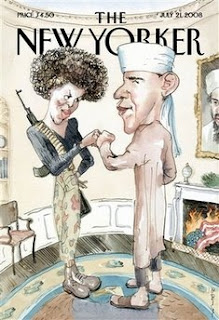 That's exactly the kind of person needed now in the White House. As the picture to the left shows, Obama is, in fact, Muslim. I know that there are some people who think the picture is fake because it is a drawing and not an actual photograph. However, the reason it was drawn was because the photographer was afraid of being spotted when his flash would go off, he therefore chose to draw the scene he saw. So let us all get together in November and vote for Obama (as many times as necessary).
Posted by Shahid72 at 9:21 AM No comments:

Where is the Honor?

While Republicans may be very excited about John McCain's choice for VP, voters should still think about who she is in real life. She is a woman who has no honor and no ethical code. It has been reported by many news sources that Bristol Palin, the 17-year-old daughter of McCain's running mate, Sarah, is 5 months pregnant. Bristol Palin is not married, which makes it difficult for me to understand why Sarah Palin hasn't done anything about her daughter's pregnancy? After all, she is religious so she should follow the ethical laws set out by religion. I know that I have followed the law when it was necessary. We all know that Sarah Palin is capable;

let the picture below talk for itself. She knows what has to be done, why doesn't she do it? The only reason is because she really isn't religious, so why would someone want to vote for her? She is an infidel and will only bring more disgrace unto America. If she can't defend the honor of her family, how can she defend the honor of her country?
Posted by Shahid72 at 7:19 PM No comments:

As Democrats gather in Denver to nominate Barack Obama as the Democratic presidentail candidate, I sit in my cave with great excitement. For the second time in history the American public will have the choice to vote for someone who represents something different - change. Although this might not be the first time, there are nevertheless some great differences between Barack Obama and Jimmy Carter, who first offered Americans the opportunity to vote for something different. I know it may be hard to understand my point, however a picture is worth a thousand words and a video is worth...
Posted by Shahid72 at 7:08 PM No comments:

Many people have sent me emails requesting tips on how to become an effective suicide bomber. Although it is impossible for me to train people in the art of suicide bombing on the internet, this video explains the fundamental principles to suicide bombing. The video was filmed at the Al Q'Utaya training facility. For security reasons I am unable to share any details, such as location and organizational affiliation, of the training camp. Remember, suicide bombing can be a blast but if not done properly it can lead to catastrophic results!

Well, my infidel friends, if you think that when I complain about the problems that the Jews (Yahud) cause us I am really at fault, boy are you in for a surprise! All that I tell you about the Jews is true, it is not made up and it is not my fault. In fact, they cause problems in other places of the world - such as Kazakhstan. Here is a video for you to see about the problems they cause in Kazakhstan. It is called Mogozrobitcher Domuvon, which means "In My Country There Is A Problem," in Kazakh. Watch it and then you can come to your own conclusions.

Song and lyrics by Borat Sagdiyev, a news reporter for the state run Kazakhstan television. With such impressive credentials it's hard to deny the validity to his statements. The video was produced by Azamat Bogatov, a world famous producer who can do a much better job than the pagan Steven Spielberg even if his eyes were blindfolded. Besides, Spielberg is an American Jewish infidel!

Shahid72
I'm a veteran three-time suicide bomber. I am forced to live in a cave like a cowardly rat. I share my life and experiences with you here.